Bugged 2010 had ten core writers. They were commissioned to write for our anthology, and appeared alongside the dozens of writers whose work was chosen from Bugged submissions. Because overheard material is unpredictable, it can get you out of a writing rut and so there are some surprises here: poet Jo Bell found herself writing her first ever short story, whilst broadcaster and non-fiction writer Stuart Maconie gave us a poem!

Jo Bell is a poet, producer and inventor of Bugged. She is Glastonbury Festival’s poet in residence and the Director of National Poetry Day. Her blog was nominated for an author blog award this year, and her poetry show Fourpenny Circus was nominated for a Ted Hughes award. All of this makes her sound far more competent than she feels.

“What I love about Bugged is that it takes my subject material out of my own hands – it depends entirely on what I hear. On July 1st I’ll be working in a hospital so I’ll have to be especially careful about changing names and details, for privacy’s sake. But there is still plenty of potential to gather material without prying. I’ll be listening at doorways as people have a fag, lurking in lobbies and paying close heed on the shuttle bus.”

David Calcutt writes novels for young people, plays for theatre and radio, and the occasional poem. He’s the co-editor

of Bugged with Jo Bell. His new novel The Map of Marvels is just out, and his play The Terrible Fate of Humpty Dumpty plays in Birmingham on 25th and 26th June.

“On July 1st I’ll be travelling to Oxford to meet with other novelists for a seminar on running workshops in schools, which is being organised by Oxford University Press. So, I’ll be in train stations, on a trains, walking through Oxford, and listening to lots of other writers talking. So I’m hoping there’ll be a lot of opportunity for some quite varied ‘listening in’. But just to make sure, I think I’ll pay a visit to the Ashmolean Museum after the seminar, and wander around there for a while. And then I’ll travel back. I’m buying a new notebook for the day.”

Mary is the longest serving Archers script writer-she’s been with them since 1979.

“I often think the experience of writing the Archers is like visiting Ambridge in my head and eavesdropping on what the characters have been up to, so this project had an instant appeal to me. I hear voices in my head all the time – luckily I have channelled this into writing for radio! I remember and characterise people by what they say; apposite and witty lines overheard, I have to admit, sometimes find their way into my scripts. So roll on July 1st!”

Steph writes for stage and radio. For more information go to her website.

“On July 1st I shall be heading into SIFA (a Birmingham-based centre for homeless people). I have recently been spending time working on a theatre project with some of the centre users. Overhearing conversations about, warmth, food and safety (particularly of the young women) go a long way to make me reassess what is truly important in daily life – and what needs to be done to work with the invisible homeless people in Birmingham. Bugged is the perfect way to capture some of these hidden voices.”

“ I want to be part of Bugged because overheard snatches of conversation are a great source for stories. I heard this the other day: “and to think that only 2 hours earlier he was at a car boot sale,” or this: “ if he texted you that he never wanted to see you again it meant he was thinking about you.” Writers use this method all the time. As one old lady whispered to another “say something interesting, Alan Bennett might be listening.”

Stuart is a writer and broadcaster. He grew up loving literature and rock and roll, and so writing for the NME was his dream job which he fell into in the late 80s. Since then he has fallen into radio and TV broadcasting and the writing of several proper best-selling books and columns in the Daily Mirror, Radio Times and Country Walking magazine. He currently co-presents the Radcliffe and Maconie show on Radio 2 and the Freak Zone on 6Music, a celebration of all that is strange and lovely.

There’s  a short video of Stuart here talking about his 2007 book Pies and Prejudice, which with and Adventures on the High Teas have made him ‘The UK’s best-selling travel writer of non-TV tie-in books’. On July 1st Stuart might well be travelling around Britain doing research for his latest book.

Jenn Ashworth is a novelist, blogger and short story writer from Preston. Her first novel, A Kind of Intimacy was published by Arcadia in 2009. Set in Fleetwood, Lancashire, it tells the story of Annie – a woman who can’t seem to stop eavesdropping on her neighbours. The Guardian said, ‘who wouldn’t kill for a comic gift like Jenn Ashworth’s?’ and on the other side of the Atlantic, Publisher’s Weekly praised the ‘beautiful, provocative prose’ and hailed Jenn as ‘a writer to watch.’

Jenn is a regular blogger who has won the Manchester Blogging Awards and been short-listed for the Completely Novel Author Blog Awards. She has just finished her second novel, Cold Light.  She’s excited to work on this project, as, like many of the characters in her novels and short stories, she has an unhealthy interest in listening to other people’s conversations. You can read some of Jenn’s short fiction and her blog via www.jennashworth.blogspot.com. On July 1st she may well be giving birth, so might not be paying attention fully to all that she hears….

Ian Marchant is a writer, performer and broadcaster. He is partially deaf, due to glue ear. His grommet operation is

currently scheduled for the 5th of July in Llandrindod Wells.

‘On July 1st I should be packing books, because I’m moving house on the 3rd. So it is my aim to escape from the horrors of the pre-move preparations, despite the protestations of my wife and family, and go to a place where beer can be had, in order to mis-hear and misconstrue what people may or may not be saying to one another.’

Mil is the author of four novels; an erratic columnist; a script writer; the creator of cult website www.thingsmygirlfriendandihavearguedabout.com and, with Mr Nash, the even culter website www.theweekly.co.uk. He’s recently started providing cycle training for his local authority too – probably because he’s some kind of ranting eco-nut intent on promoting a ruthless green agenda. Tch. A couple of years of National Service is what he needs, that’d sort him out.

“I’m taut with swollen lust at the idea of Bugged because I’ve long been worried about the decline of lying in Britain. The Noughties-long fetish for ‘reality’ is a lazy and asphyxiating thing; bypassing and/or rejecting invention yet despicably claiming to be better than it. I hope those who join in Bugged – I’ll call them Buggers – will reassert the splendour of taking a tiny, tiny sliver of fact… and running with it. Running *amok* with it. Putting an overheard sentence in a mouth creatively unlike the one it came from; turning it to other ends; taking it on a distant journey; harvesting a mundane truth but with it cooking up a delicious lie. This isn’t just a writing exercise people: it’s a bleeding crusade. OK?” 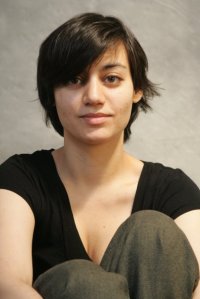 Leila Rasheed is a writer and tutor. Her children’s novels include Beans, Chips and Limousines; Doughnuts, Dreams and Drama Queens; and Socks, Shocks and Secrets.

“On July 1st I will be in Ascea, a small village in the south of Italy, getting ready to get married in three days’ time. Most of the people around me will be Italian, so I shall practice my Italian listening skills. However, I shall also spy with gusto on my friends and family who will be there for the wedding. They won’t mind – they are used to it. If I over-hear anything really juicy, like my fiancé plotting to run off with the bridesmaid, I promise to turn it into art for the sake of Bugged.

My favourite over-hearing was a lady on the bus who, as we passed Birmingham markets, confided to her friend – “I’m not a lover of lamb-chops.” Buses are great places for over-hearing things. The bus service is infrequent in Ascea, so I probably won’t be listening in on buses there. The café is a great place to over-hear things: in Britain, it’d be the pub.”